Spring in the Rockies means rockfall. Snow melts and water flows causing loose rock to become lubricated thus heeding the call of gravity. This past week we have had a couple major rockfall events worth noting. Both occurred within the same week on either end of Mt Rundle. The first noted was by Matt Mueller and myself while guiding at Rundle Rock in Banff. It occurred sometime between Monday evening and Wednesday morning (May 28-30). Massive new boulders are scattered around the belay area of the steeper, pocketed wall. There is a big fresh scar on the steep rock wall above and right of the Rundle ridge. It is unsure whether more debris is poised to come down. It would have been disastrous if people were hanging out in the area at the time of the rockfall as they surely would have been vaporized. It might be a good idea to avoid this area for a while. 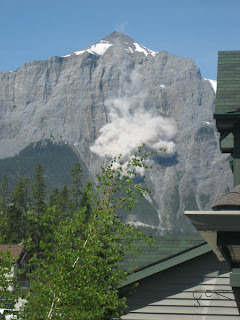 The second occurred around noon on Friday (May 1) on the EEOR rock face above Canmore. I did not get to see it personally but folks who did said it sounded like an explosion complete with massive dust cloud that completely obscured the summit. The release came from the top of the diamond buttress between the rock routes Dropout and the MacKay route. The path is obvious from town as a lighter coloured streak down the face. See photos by Klaus Furhmann who managed to snap off a few pictures from his deck in Peaks of Grassi.

Not sure if these are isolated events or related but I would be cautious about what I decided to climb and what I hiked under the next couple of weeks until things settle out. I've even put off guiding plans for the NE buttress of Chinaman's peak (Ha Ling) for a week or so to make sure.
Posted by Sean Isaac at 10:27 a.m. No comments: