After two months of hunched over my "confuser", the 2008 CAJ is finally complete. We sent it off to the printers today. Yeah-hoo! This is my first year as editor so the learning curve was steep, to say the least. Fortunately, I was smart enough to surround myself with a highly skilled team of wordsmiths and designers. A big thanks goes out to Helen Rolfe (Contributing Ediotr), Lynn Martel (Copy Editor), Suzan Chamney (Layout/Production), Hermien Schuttenbeld (Graphic Assistant), Anne Ryall (French Editor), Zac Robinson and Chic Scott (Historical Experts), David P. Jones (Columbia Mountains Expert) and, last but not least, Geoff Powter (Editor Emeritus). The 2008 CAJ should be available by the first week of July. I just hope all this effort was not in vain and it informs, inspires and entertains. 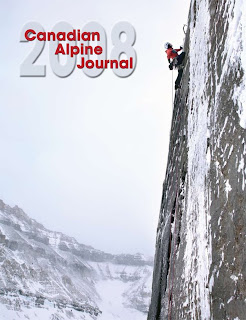 Cover: Raphael Slawinski on the first ascent of Victoria's Secret Deviation on the Stanley headwall, the Canadian Rokcies. Photo: Wiktor Skupinski
Posted by Sean Isaac at 8:43 p.m. No comments: