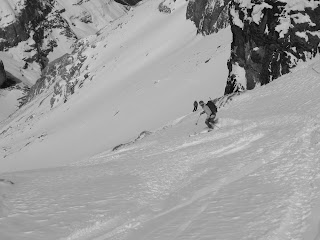 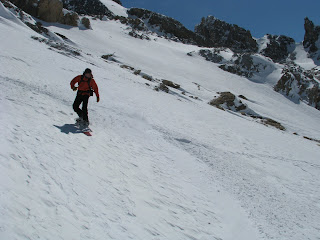 Enjoyed an amazing day of spring skiing up on White Pyramid today with some friends (nice change from 3 weeks straight of editing CAJ stuff...). We were expecting cruddy turns but ended up with perfect conditions.

Approach: Park at the pull-out on the west side of the highway about 5km north of Waterfowl Lakes. We botched the approach to Epaulette Lake by gaining too much elevation on the treed ridge and had to lose 150m. The beta is to cross Mistaya Creek (still fully frozen so no wading) then keep angling rightwards without gaining too much elevation until you hit the creek/drainage coming from Epaulette Lake . This is then easily followed to the lake. We discovered it on the way down of course.

Avi Obs: Despite intense insolation, we did not see anything moving even from steep solar aspects in the afternoon (only minor pinwheeling). Some older debris from at least 2 days ago.

Summit Ridge: Instead of gaining the summit ridge from the head of the valley (steep looking gully/headwall) as described in Chic's book, we cut left a few hundred metres before and worked up moraines and gullies putting us onto the ridge further up. We wore skis to just before the sub-summit then boot-packed to said sub-summit, which is about 150m lower than the main summit. The ridge became more involved than we anticipated so did not continue to main summit. Light AL crampons and an axe are a good idea. Ski crampons were not required. 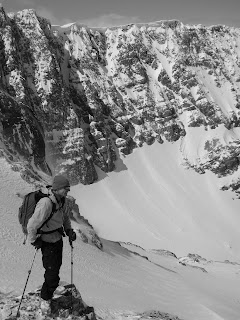 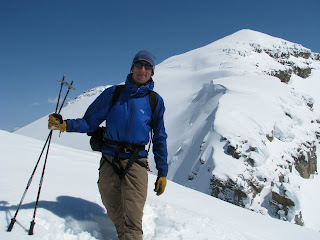