The ice was voicing dissatisfaction with the Arctic weather at Haffner Creek the last two days. All day groans and pops were emanating from the pillars and daggers. Surprisingly, nothing spontaneously broke but a few of the snapping sounds were loud enough to make us think they were close to coming down on there own. We refrained from climbing anything that was not well supported and hooked out. It is worth the reminder that sub -30 C temperatures are not ideal for ice climbing. The ice is very cold resulting in fragile pillars and brittle bulges that are primed to explode. Definitely avoid hanging out under and climbing on free-hanging icicles and skinny free-standing pillars (even on top-rope).

On a different note, I was surprised to see the T2 dagger on the Trophy Wall on Mount Rundle was still in one piece. I was certain this cold snap would snap the pillar. Also, I was shocked to see that Sea of Vapours is formed (or should I say forming). A Few days ago there was no hint of ice above Postscriptum and now there is a silver streak snaking down the entire corner, albeit very thin looking.
Posted by Sean Isaac at 8:42 p.m. No comments:

Left the car at 7:45 in a light drizzle (-1 C) that turned into snow. The ice on the first pitch is thin but takes 13cm screws. The two mixed pitches pitches in the middle offer fun M4 climbing. On the first one, the steep chockstone moves are protected with a new bolt on the left wall (Thanks to whoever placed it). I managed to place stubby under the second chockstone. On the second mixed pitch, a #2 Camalot can be stuffed under the first chockstone then fond a good thread at the second one. Both these pitches have solid two-bolt belays. The final ice (right hand flow) is slightly delaminated with the warm temps but easy (two-bolt anchor at the top no the left).

This is a fun moderate mixed gully in early season condition. It gives a taste of alpine gully grovelling without the commitment. Of course, later in the season, ice covers the rock and chockstones turning it into its normal WI2 condition.

By noon, it was dumping (S2). With the new snow this afternoon, the bowl above will be reaching threshold amounts so the route should be avoided for a couple days until things slough and settle out.

The first photo is of Jason Wheeler on the second mixed pitch. The second photo is of his busted crampon lashed to his boot with bailing wire. Never leave home without bailing wire and duct tape... 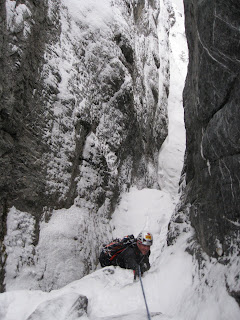 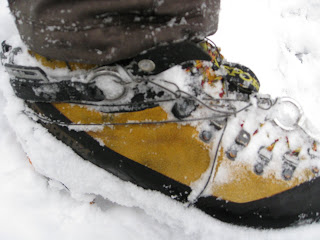 Matt Mueller, Christina B. and I had a great day back up in the Bow Summit area skiing the Jimmy Junior Cirque. The temperature at 1030 was -17 Celsius so we spent little time stopping and lots of time skiing. We managed four runs, all of which were of great quality--cold boot-top powder. The Nov 2 rain crust is still doing its job keeping us off the ground. HS is still averaging 60-70cm but some areas are much less with the new snow barely covering the previously wind-scoured scree. Having said that, I only hit one rock all day. Almost no wind but what slight breeze there was made for very cold noses. Days are short, and combined with the cold temps, it wise to avoid getting too remote in case of injury or equipment failure. 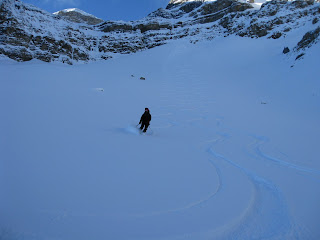 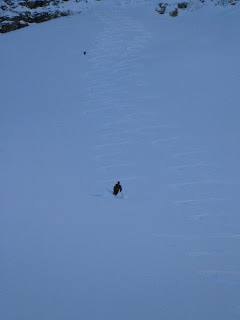