Marc Piche and I had a recreational day knocking off two classic single-pitch Ghost classics--Phantom Falls and The Sliver. Both are rare to form and I have wanted to do them for awhile. Marc fired Phantom, which is a 55m pitch that thins and narrows near the top. Bring stubbies to protect just before the crux. The new bolted anchor on top could use some chain. Steve (forget last name) showed up with Rockies legend Jeff Marshall and did it after us. True to form, Jeff was kicking it old school with a one-piece MEC windsuit from the early 90s. To complete the retro look, he busted out a vintage pair of Footfangs.

Since Marc had done the Sliver before, I was given the lead on this gem. Similar (i.e. narrow and thin) to our warm-up but definitely steeper and more technical. Lots of hooking in a body-wide column with a bit of a roof near the end of the difficulties. Despite a fragile appearance, the ice is well bonded and accepted 13 and 16cm screws. The three V-threads scattered up the pitch gave it a sport climbing feel (well, not quite).

Burning and Drowning also look good and we brought the rock gear for it but time was running out with our late start and me having to be back for movie night at Noah's school. 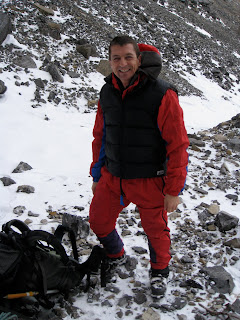 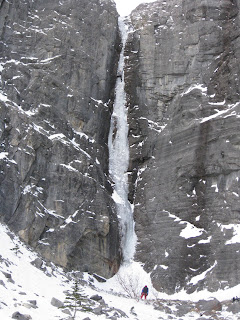 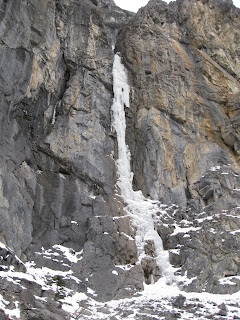 I just spent the past seven days straight guiding ice. Early season ice climbing is always a challenge due to the fact that psyche and conditions are typically at opposite ends of the continuum: psyche high, conditions variable. Having said that, I really enjoy November ice. Usually very little snow on the approaches, wet ice and minimal avi hazard all contribute to make it a special time of the winter. The ACC Banff Ice Camp was a success. For five days, we attacked the new ice and managed a good variety of climbing styles from sport mixed to pure drytooling to classic WI4 multi-pitch ice. The next two days were private mixed guiding at haffner Creek and up Rogans Gully. Normally an easy WI2, Rogans offers fun scrappy traditional mixed climbing at this time of the year. It has an alpine feel grovelling up the narrow gully and is currently in M4 WI3 condition. The following photos give an idea of conditions encountered. Routes/areas we did include: King Creek, Bow Falls, The Playground, Haffner Creek, Hidden Dragon and Rogans Gully. 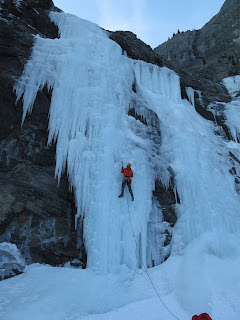 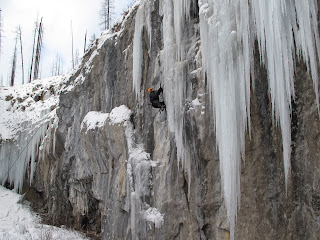 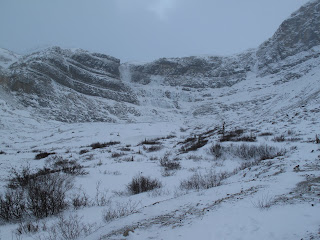 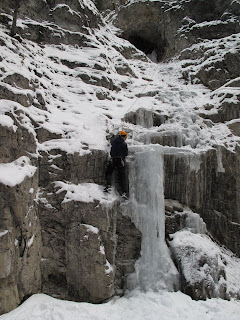 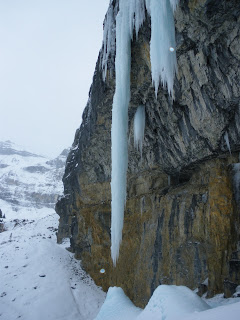 OK, here you go. This is a photo of an almost-formed, unclimbed, single-pitch, WI 6 pillar. By now, I am guessing this never-before-climbed feature is actually touching down. It was close last week and judging by the amount of dripping, it was still growing. It eagerly awaits the gentle touch of a very skilled climber (if your last name is Lacelle, that would help). Figure out where it is and go do it. Too sketchy for me! Being a slender, free-standing pillar, your first screw placement will have to wait until about 25 metres up once you are above where it attaches to the rock--essentially a free solo. In total, this pitch will be about 60 metres long. It is pretty rare these days to find virgin pure ice routes so go snag the first ascent of it. She won't be a virgin for long; unless it gets cold soon and it collapses. Who will be the first?
Posted by Sean Isaac at 8:07 a.m. 3 comments: